I was in "Colonel Chutney's Bar" when I was 17 years old. I met a guy who was a friend of my sister's. We talked for a while and he ended up offering me a job. Not having one, I accepted. It turned out he was a framing sub-contractor. Except for a quirk of fate this could have been a story about a plumber. Plumbers are a low breed. "Shit runs down hill and payday is on Friday" is the old adage. Although plumbers make more money than carpenters (there is no justice in the world) I prefer being a carpenter for a variety of reasons. It is a challenging and rewarding discipline. Anyway, here I am 31 years later. Thank god I met a carpenter.

Framing is one aspect of carpentry. It is what I am discussing here. Framing is a profession that requires the energy of youth. The problem is; about the time you have enough experience to know how to use that energy it runs out. Working like a galley slave all those years turns that window of opportunity into more of a porthole (call soon). Framing is the part of carpentry that is by far the most complex and physically demanding. It is also the least appreciated, compensated and celebrated. Framers typically don't have time to complain about this but since I have graduated to other things, I thought I would.

"Carpenter Brain" is a term I came up with a long time ago. It involves several different but complimentary traits, attitudes and abilities. I am going to describe them and how they work together. I think the carpenter brain mentality can be applied to many situations in life not related to carpentry. Framing a house is, on the surface, pretty simple, (like life)however, there are a thousand little tricks that result in efficiency and quality.

Carpenter brain is about knowing what is important and what isn't. If it is not important don't make an event out of it, just get it done. If it is important, slow down and take the time to make sure it is exactly right. You have to know what needs to be exact and how exact. Tolerances might be as little as +/- 1/64th" or as much as +/- 1". If you get this wrong you are probably ruining somehting, wasting time or producing an inferior product. It means knowing how much force is necessary. Too much force can result in injuries and damaged work. Too little force and you don't accomplish anything or it takes too long. There have many times when I have seen someone with less experience struggling with something. I'll say "You want Dad to handle it?" Then I will apply the right amount of force and it will happen the way I wanted it to. Quickly.

One thing an effective carpenter must have is an ability to see how a thing will look before it is built. Even with a picture many people cannot do this. Achitects are supposed to be good at this. They frequently aren't. As a result we often tear down things because the architect or builder did not imagine the end product accurately. You have to imagine what they want. Or you have to interpret a vague or incomplete drawing. You then have to explain your understanding in a way everybody comprehends. Even after sincere attempts at this there are often misunderstandings. I don't know if if the diplomacy required at this point comes under the heading of "Carpenter Brain" but it certainly helps your business. "That might be my fault" is useful. Then we can walk away with nobody claiming responsibility. This is still problematic when it comes time to decide who pays for something. I didn't set out to dicuss business communication.

I don't think this is a matter of miscommunication nor is it  a conceit. You must have  some confidence in your own infallibility to be effective. On second thought, maybe it is a conceit but it is a useful conceit.There is some relatively simple math involved. I think imagination and creativity are more important. This very much applies to problem solving and fixing mistakes. Incidentally, there is no room in the carpenter brain for blame. Spending time trying to figure out who is to blame does not solve problems. It is a watse of time and costs money. I have often seen the conversation about who is to blame take longer than it took to fix the problem. This is not carpenter brain thinking.

Having a carpenter brain means paying attention. All the time. It means noticing a knot and not shooting a nail right in it, thus avoiding a potentially injurious ricochet. It means always being aware of what others are working on and what is going on around you. Even if those things have nothing to do with what you are doing at that moment. You should be listening to everybody, on the whole job, so if you hear that they need something and you happen to be walking right by it, you can bring it to them.This level of paying attention frequently results in questions like: "How the hell did he know that?". It means communicating with your co-workers to create safety, efficiency and productivity. It means planning and being aware of the consequences of what you are working on, both for your future work and the needs of other trades. It means knowing the purpose of every nail and the function of every piece of wood. You have to anticipate potential problems and avoid them, constantly.

I frequently dream about work and solve problems in my sleep. This pisses me off. I shouldn't be dreaming about it if I am not getting paid. I should be dreaming about getting laid like everybody else. I will spend a whole weekend distracted by other things and still remember three or four important measurements on Monday (most people can remember one for no more than a few minutes). Where does this focus come from? I don't seem to have it in any other area of my life and my being a carpenter is an accident. That is a philosophical debate more appropriate for another venue.

"Attack Mode" is a term I came up with to describe the aggresive almost berserk attitude of a carpenter getting something done. To an observer this behavior might seem random or chaotic. It isn't. It is determination, efficiency and precision when approached correctly. Attack mode means "this is going to happen and it's going to happen fast". It also means it is going to happen right. You are concentrating on what you are doing and nothing else. There is great precision in being aware of what you want to accomplish, where your tools are and where your materials are. You want all this stuff easily accessible but not in your way. Also, it is being mindful that you can take something with you when you go get something. That way you eliminate a trip.

Anything is possible. Everything is where it should be and you know exactly what to do next. There is very little worry because you know whatever you are trying to build  will get built and turn out like it is supposed to. There are freedom and security in this feeling. Attack mode is picking up things you think are too heavy.  This is mostly a matter of wanting to but there is an element of technique involved. It is the summoning of greater force than one might think possible. All day. When you are in attack mode there is a clarity of purpose and all fears that are not rational go away. There are plenty of things in construction that should be accorded a healthy respect: heights, heavy objects, power tools, heavy equipment, guys who just got out of prison and really don't mind going back etc....

This all might seem reckless. It is not. It is precise, careful and safe. Most safety comes from awareness and concentration, both of which are very much a part of "Attack Mode".

This discussion might sound like bragging. So what? I have a "Carpenter Brain". The fact that I can describe it proves I have one. Let's ignore the fact that I made the term up and it can mean anything I want it to. Besides isn't bragging what websites are for? 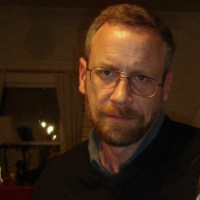 I would not have had this picture on every page but I couldn't figure out how to prevent it. This is the only good picture of me there is. 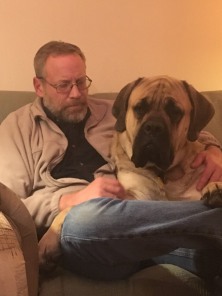 This the newest member of the crew. His name is Porthos.